Skip to main content
The current document is no longer updated, click here to the latest version of DODO DOCS. 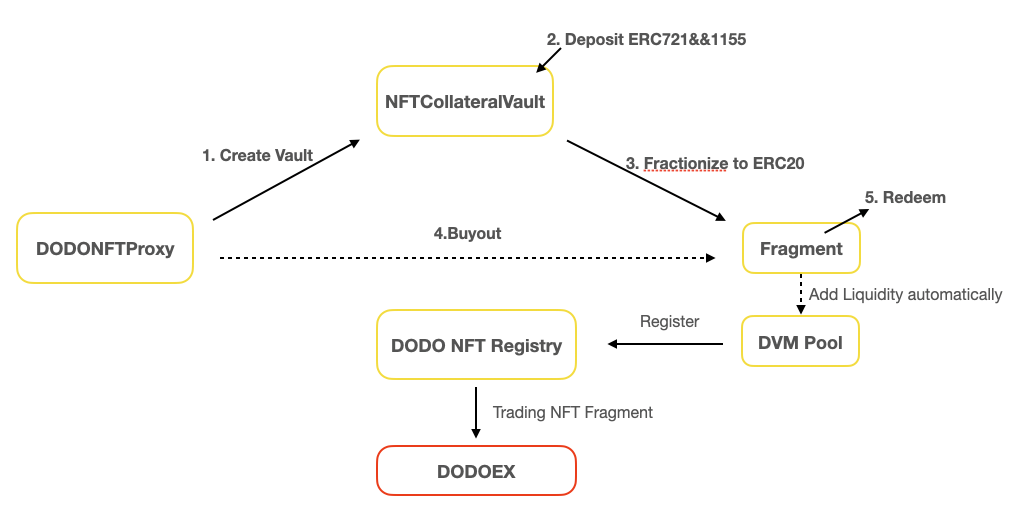 First, users can create a new Vault contract by calling the createNFTCollateralVault function in the DODONFTProxy contract, which is used to store NFT compatible with ERC721, ERC1155. Also, users can set the name and baseURI for Vault, which can point to the resource file as the Vault's introductory information.

The Vault that has been just created can be used to deposit NFT compatible with ERC721 or ERC1155, and there is no limit on the number of NFT users can deposit. The deposited NFTs are owned by the owner of the Vault contract, and the owner has the right to fragment the whole NFT by the unit of Vault.

If users deposit ERC721 to the Vault, the ERC721 needs to be authorized to the Vault contract. The second step is to call the depositERC721 function of the NFTCollateralVault, and include the following in the deposited parameter package: deposited contract address of the ERC721 and deposited tokenId array.

If users deposit ERC1155 to the Vault, the ERC1155 needs to be authorized to the Vault contract. The second step is to call the depositERC1155 function of the NFTCollateralVault, and include the following in the deposited parameter package: deposited contract address of the ERC1155, deposited tokenId array and its amount.

Fragmentation refers to the process in which the deposited NFT is being fragmented. The whole process involves the creation of ERC20, the creation of DODO Vending Machine public pool, liquidity provision to the pool, and circulation in the secondary market. Then users can trade against these ERC20 tokens using any tokens. The process also involves transferring the ownership of the Vault contract to the Fragment contract. After the fragmentation, no one can withdraw these NFTs, ensuring that the fragmented ERC20 tokens represent all the NFTs in the Vault.

Fragmentation needs to be triggered by the owner of the Vault, which is achieved by calling the createFragment function in NFTCollateralVault.

The fragmented NFT will be circulated in the secondary market, and those who own the fragmented tokens also own a portion of the NFT. If the buyer is looking to own the whole NFT, the buyout can be triggered by calling the buyout function of DODONFTProxy.

In order to make a buyout, buyers need to provide tokens corresponding to the total valuation at the current unit price of the fragmented NFT multiplied by the total amount. The following is what the buyout process looks like.

After the buyout, the holder of the fragmented NFT in circulation, in the secondary market, can redeem the token at the same value as the unit price at the time of the buyout, and call the redeem function within the Fragment contract to destroy their fragmented NFT in exchange for the equivalent value of the tokens.